It’s back! I know that I haven’t posted a Sunday Runday in approximately three weeks, but I’ve had good reasons. I haven’t been running on Sundays. Or Saturdays. Or much at all.

I have thoroughly been enjoying my time off from training. I get to sleep in an extra hour and a half and I’ve been able to catch up on some work for school. I even started some new projects both in writing and at school. It may seem like I have been lazy because I haven’t been running, but actually I have been quite productive. 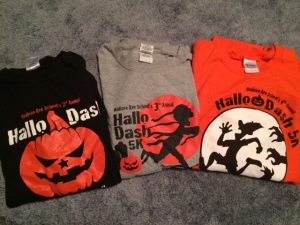 a race. But not just any race. My favorite race of the whole year; Hallodash. I’m not going to lie, the reason that this race is my favorite is slightly shallow. It isn’t because the course is great or because it is big or because people dress up for the race. It’s because the shirts they give out every year are super cool and always my favorite (Don’t believe me? Check out the shirts from the last 3 years). This race is also important to me because it is one that I have done the most times so far.

The first time I ran this race I completed it in 33:17. Last year, 29:37. This year I finished in 27:24. Not only did I beat my previous times, I also did something I never did before. I didn’t have to walk up the giant hill at mile 2.5 this time. That hill usually always gets me and I don’t have the drive or strength to run up it but yesterday I was determined to do it. And I did. I may not have placed, like I did last year, but I made progress.

Tomorrow I begin training for the Griffith Park Half Marathon in Los Angeles which is in January. I was definitely feeling a lack of motivation prior to to the race yesterday but I told Kait on the way home that I think running Hallodash got me pumped to start training again. Twelve weeks of dedication. Let’s do it!